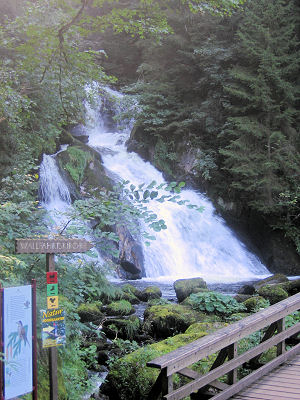 The city of Triberg is located directly on the Black Forest railway line and is famous for Germany's highest waterfalls, which have an overall drop of 163 metres over 7 cascades. More than half a million people visit this spectacle of nature every year.

There are three entrances to the waterfalls, which are reached via asphalted paths, steps and footbridges. You should be a reasonably good walker of course, and the paths are totally unsuitable for prams and pushchairs. However, you can reach the lowest and largest cascade of the waterfall relatively easily from the main entrance.

The area around the entrance to the waterfalls is reminiscent of Disneyland; here and in the town centre, a large number of shops offer the even larger number of tourists cuckoo clocks, woodcarvings, souvenirs as well as Black Forest ham and kirsch. These are high quality craft products for the most part, although there is no shortage of plastic cuckoo clocks 'made in Taiwan'. The Black Forest Museum, which is well worth seeing, can also be found directly by the lower entrance to the waterfalls.

Anyone who wants to escape from the hustle and bustle can easily do so - the countryside around Triberg is fantastic, and after a few hundred metres you will see and hear nothing more of the crowds.

More about the Triberg Waterfalls 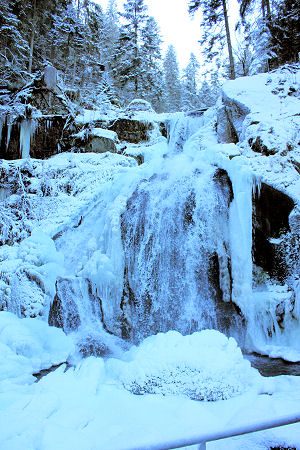 A very special attraction are the Triberg Waterfalls in wintertime, when the spray caused by the splashing water freezes to thick ice crusts around the cascades (see photo, shot in January 2009).

Trackback specific URI for this entry